While a 10-year-old black boy was out on a walk, he spotted something in his neighbor’s garage when it was left wide open, and it sent a bolt of fear through his little body. It also left an unsettling feeling in his two white fathers, who snapped a picture to post to social media and complain.

Little Hugh Hart was on a stroll through his neighborhood when he realized for the first time what was living a few doors down from this home in Greenfield, Massachusetts. His two white dads, Lindel and Rod Hart, knew that their neighbor, Dan McCarthy, was a police officer, but they didn’t know until that afternoon what he kept in his garage. And, it left them deeply disgusted and horrified.

Officer McCarthy had a massive Confederate flag hanging on an interior wall in his garage, and it made the gay couple and their black son feel extremely unsafe in their own home. They have lived near this police officer’s garage for a while, and he never posed a threat or gave them a reason to feel like they needed to fear for their lives. But, this flag has them feeling like they need to pack their stuff up and run.

“Hugh has become increasingly aware of police antagonism against young black males and is understandably worried,” Rod Hart posted on Facebook while sounding arguably biased against law enforcement. “We have had a few nightmares, some terrified comments and even a wish for Santa to bring him white skin that he can wear outside so he won’t get shot.”

Rod continued his post by saying he and his husband have always convinced their son that he is safe in Greenfield and that its police department is a “benevolent brotherhood of peacekeepers.” However, some of his now-deleted Facebook posts cast doubt on the veracity of that claim. Doubters say that the gay couple’s issue is more about their hatred of cops than it is about a flag in a garage. 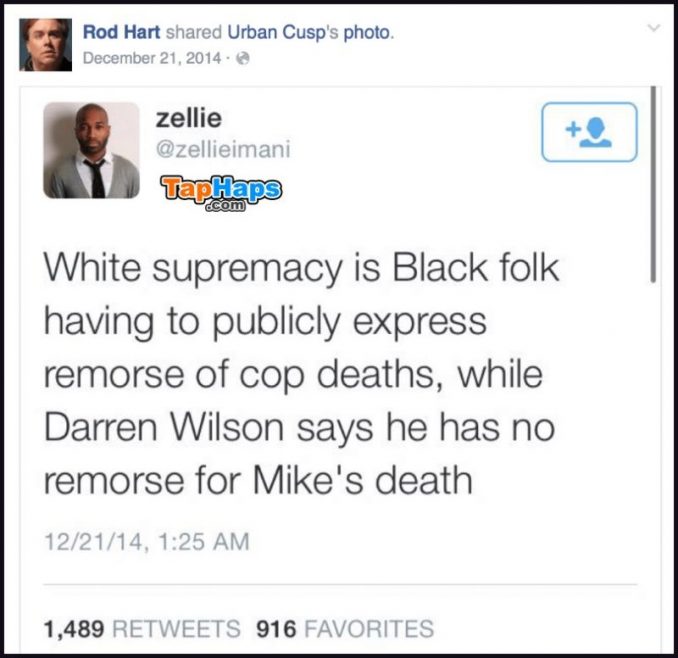 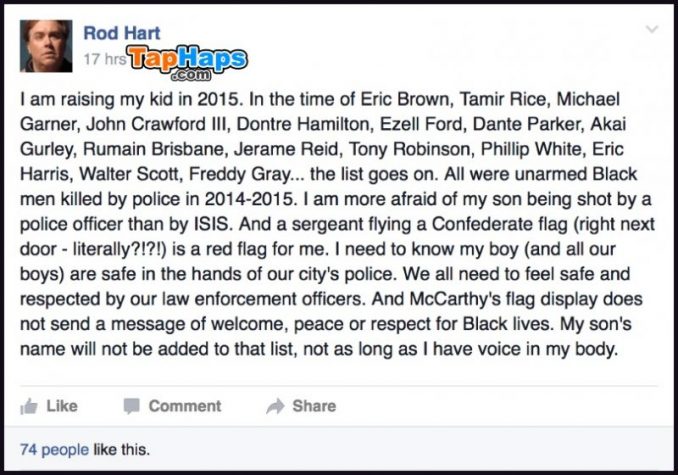 The town’s mayor met with Lindel and Rod Hart, who lodged a complaint with Greenfield police instead of approaching McCarthy with their concerns. Subsequently, the police chief contacted them by text message with intentions to get the issue resolved to their satisfaction. “I hate that their son has fear of the Greenfield police,” said Police Chief Robert Haigh.

At the time of the incident, McCarthy was the commander of the detective bureau and the department’s liaison to the town’s Human Rights Commission. He posted a single Facebook comment in response to the reports of racism lurking in his garage. “Hatred is not a piece of fabric; it resides in people’s hearts,” the officer said. “As a Catholic man, I have no hatred in my heart and try to see the face of God in everyone.”

The police chief said he believes McCarthy has taken down the flag, which outraged some readers. “So you’re not allowed to have something hanging in your own house because it might offend someone?” one commenter asked. “Are you kidding me? Leave the man alone, get over this self-righteous social justice crap and grow the hell up. People might not agree with your personal views, too bad, that’s life cupcake.”

Many readers supported the police officer and claimed the Harts were the real racists because they had taught their son that the Confederate flag was a symbol of racism. “Who told him it means racism? Did Daisy Duke say that?” another commenter asked. “And just to cut off any disparaging remarks, I have raised minority kids, so I know racism when I see it… And sorry, I don’t see it here.”

Lindel and Rod Hart said everyone is entitled to free speech, and they claim to defend it despite reporting their neighbor’s flag in the back of his garage instead of having a conversation with him. “It’s perfectly legal, and I understand freedom of speech, but with that right comes responsibility,” Rod said. “If it was just any neighbor, we’d still be upset, but not like this. He is a municipal employee. He’s a police officer. That holds more weight.”

The couple said that they now have to convince their 10-year-old son that his neighbor is not a “racist, redneck cop.” All things considered, that should be an easy feat. If a boy his age still believes in Santa in the age of the internet, Hugh will accept anything his parents tell him. It leaves you to wonder how he really developed his fear of police officers. I’ll leave that for you to decide.